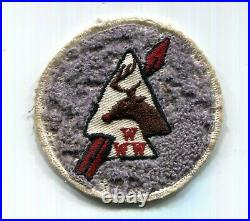 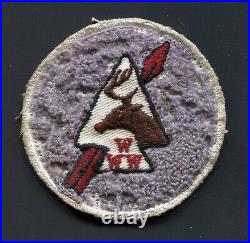 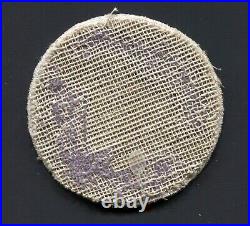 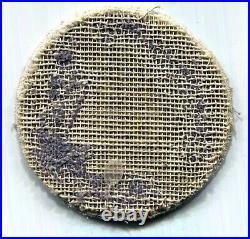 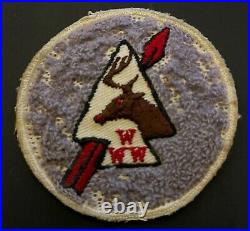 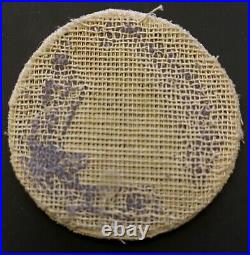 BSA OA Lodge 430 Ahwahnee C1a – round chenille – stag & arrowhead – scout patch. One Embroidered Twill Cloth Chenille Patch (aka badge, crest, emblem, insignia, threads). White Twill Ribbing (arrowhead) slants to the Right. Previously Owned – Used, Sewn, Thread Remnants. Some of the tufted gray threads have come off. Was also collection mounted in a display case. Measures approximately 75-76 mm diameter. Patch Images: Arrowhead, Arrow, Deer Stag (lodge totem). Of the actual item available in this listing. BSA = Boy Scouts of America. OA = Order of the Arrow. Chenille is French for caterpillar. Some brief history : Around about 1920 Orange County Council, California (OCC) started to grow and grow. Finally in 1944 they got too big and too successful and divided into Northern Orange County Council #37 (NOCC) and Orange Empire Area Council (OEAC). NOCC changed their name in 1965 to North Orange Council #37 (NOC). In autumn of 1972 North Orange Council rejoined with Orange Empire Council (aka Orange Empire Area Council or OEC) to reform Orange County Council (aka OCC or OCBSA) #39, California. A short time later in 1973 Order of the Arrow Ahwahnee Lodge #430 of NOC merged with San Gorgonio Lodge #298 of OEC to form Wiatava Lodge #13 with their Cog Totem. Ahwahnee Lodge was formed in 1950. The lodge was so popular that they scout camp was named after them. TO THE LUCKY WINNER. In some situations some items are not allowed to be sent to your country because of the buyers import laws, buyers please check that an item is allowed to be sent to your country. We do not mark merchandise values below value or mark items as “gift” – US and International government regulations prohibit such behavior. Powered by SixBit’s eCommerce Solution. This item is in the category “Collectibles\Historical Memorabilia\Fraternal Organizations\Boy Scouts\Badges & Patches\Order of the Arrow Patches”. The seller is “ribitz” and is located in this country: US. This item can be shipped worldwide.